skip to main | skip to sidebar

As the Soviet Union collapsed, Boris Yeltsin gained control of Russia and took on a team of US funded, Harvard-led Chicago Boys, newly labelled 'transition experts.' Jeffrey Sachs, now of immense international fame, was on board as well. Immediately the people's cries for unions, communes and welfare spending were overridden by the lifting of price controls, massive privatization, and the installation of free trade. Though Yeltsin had to seize control with the military after losing the next election, the IMF and the US administration still praised his foreward thinking, economic reform, and fight for democracy!

As average income, quality of life and unemployment worsened, in 1993 the international bodies called for MORE shock therapy, more budget cuts and privatisation. Suddenly $2 billion dollars a month was being moved off shore as Russian oligarchs worked in collaboration with foreign investors - often spending foreign 'aid' that should have gone to the people - to reap the maximum benefit from the nation's garage sale. As protest mounted under the next administration, Putin started a war with Chechnya, which rapidly distracted the press and quashed any dissenting voices. A Harvard-sponsored advisory team was implicated in a profiteering scandal. All the while, Sach's reputation grew and Russia was praised for its progressive reforms.

As Russia's economy plummeted, Sach's was stunned by the lack of investment and foreign aid. He had advised Russia to privatise and open up with the belief that incoming aid would balance the sale of state assets. Klein attributes the lack of international support to wholly political causes: because the great communist threat of the cold war had fallen, there was no longer a need to intervene in struggling countries with the aim of ensuring their capitalist and democratic development. Russia, especially, was least entitled to aid and support from international bodies that had previously fought against the spread of the red.

Lesson Learned: Internal and international corruption can quite smoothly contribute to free market reforms, especially in a politically turbulent country struggling with new government. Klein goes so far as to say that, insofar as ideologues trust to the free market, individual's greed and corruption are expected corollaries or even a necessity of free market reform. If your focus were on wealth distribution or welfare, in fact, you would be interfering with 'proper' economic transition.
Posted by Alexander 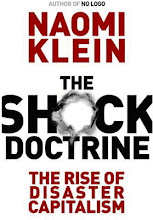 The Shock Doctine by Naomi Klein